Baaghi 3 Full Review - Worth or Not worth 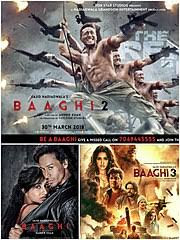 hello guys ,Where have you heard brother, that we should give voice from here and the person sitting far away should listen to him. The answer is that if the person sitting next to you also sounds twice, he will listen. Well, in rebel 3 the bonding of two brothers has been made a base in which one brother is physically busy and whenever he gives voice to his brother, his brother is present. The action-filled or, say, much more rebellious 3 is the story of two brothers. i will sugeest u to see this movie


Baghi 3 is set on the backfoot of Agra. This story is of two brothers, in which one brother Ronnie (Tiger Shroff) lives as a shadow of his brother Vikram (Ritesh Deshmukh). Ronnie reaches out to help Vikram in every trouble and every trouble. Ronnie and Vikram's father (Jackie Shroff) was a police officer. He dies in an accident, but before he dies, he tells Ronny that he will always take care of Vikram. Rony saves Vikram at every step, considering his father's last words as a stone streak.

There is a huge gangster named IPL in the area of ​​Agra where Vikram is posted. IPL Kidnaps families from different cities of the country and sends them to Syria. One day Vikram gets an order to raid the IPL base. He gets scared but together with brother Ronny, he saves the kidnapped family. Now he has become the coop of Agra. he is very dangerous man

After some time Vikram is sent to Syria by the Ministry of External Affairs to investigate any matter. Vikram goes to Syria; But at the instance of the IPL, he is caught by the men of Abu Jalala, Syria's largest terrorist group. Now Vikram is in real danger. In fact, Abu Jalala is the head of a terrorist group that is terrorizing Syria and the whole world by carrying out suicide attacks. Now to save her, her brother Ronnie goes across India from seven seas to Syria. She is accompanied by her girlfriend and Vikram's sister-in-law Siya (Shraddha Kapoor). Reaching Vikram is not easy for Ronnie. Now it is to be seen in the film whether he can save his brother or not? what you say


Tiger Shroff was right in the role of Ronnie. His acting was also fine. If seen, an attempt has been made to bring an emotional twist in the film, which is not emotional from anywhere. So there was a lack of this emotional expression in Tiger as well. Ritesh Deshmukh, Shraddha Kapoor, Vikram's wife Ruchi's role, Ankita Lokhande all did a fair amount of acting. Apart from these, Vijay Verma and Jaideep Ahlawat have also done the exact acting according to their role.


The direction portion of the film was weak. Bagi 3 could have been introduced better if compared to other simple story films, but somewhere after an action hit like Bagi 2, director Ahmed Khan also made the action in Baaghi 3 a main course. Due to this, overdose of action is seen in many places in the film. Tiger Shroff's action sequence between army helicopters, tankers started without any reason.


In Action Drama Bagi 3, you will not get anything except action, action and action. You will get emotional cheating of brother-brother relationship in the film. Yes, apart from the action, you will also see Ovdose of Tiger Shroff in the film. It seems as if Baghi 3 is made only for Tiger's showcase.
Baaghi 3 Full Review baagi 2 movie review